In the rare possibility that you do not know who he is, he is one of Singapore’s Top Youtubers. JianHao Tan is no stranger to Singaporeans. Having over 2.8 Million Subscribers at the time of writing, he is Singapore’s most popular and top-rated Youtuber in the world. His videos are always filled with fun and laughter, never failing to lighten up moods of millions of Singaporeans and others worldwide.

Recently, he officially announced that his fiancée is indeed pregnant in a Facebook post, answering to the widely speculated gossip among Singaporeans – if Debbie was indeed pregnant.

This was after some of the hints dropped by the couple in various social media platforms such as Instagram:

Notice how the couple were shopping at the “Baby Care” aisle and using a miniature sized trolley for kids?

Then there was the other post on Jian Hao’s Instagram account, which shows a comparison between Debbie’s tummy and Cheryl Chin’s. This further adds on to the list of factors contributing to why Singaporeans are wondering if she is indeed pregnant.

However, Jian Hao has officially announced in a Facebook post on 14 April, at about 9 pm, that his soon-to-be wife is indeed pregnant. He posted a photo with himself and Debbie, holding photos of their child with the caption: “A lot of emotions are going through me right now. I’m so nervous yet excited to share this with you guys. Yes @debbwie is indeed pregnant and in a few months, we’re going to have a little version of us in our arms. Thank you all for your constant support and love. I can’t wait for you guys to meet the baby and for the baby to meet you”. The post has since garnered close to 100 shares within an hour. 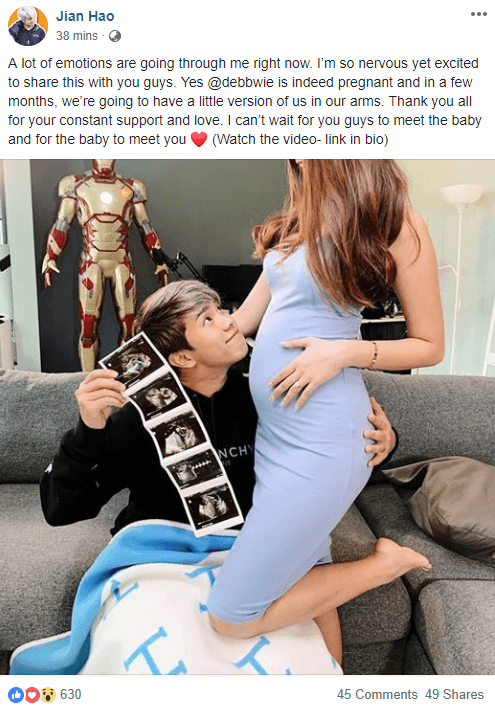 Many comments poured in, congratulating the soon to be parents. 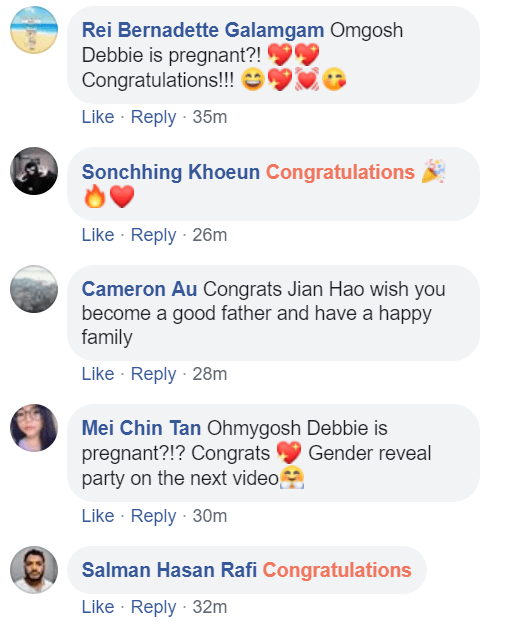 Now that this pregnancy rumor is answered, the next gossip among Singaporeans will probably be on the gender of the baby. Nonetheless, huge congratulations to both Jian Hao and Debbie!