On the 13th April 2019, a Youtuber named Selicia Felicia posted a video of which was titled “Waterfall at Jewel Airport”. The post was then shared to a public Facebook group by Facebook user Rick Zi. 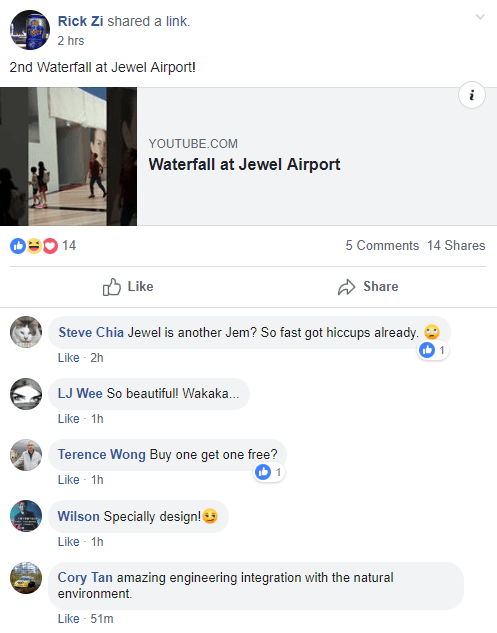 In the Youtube video which is 1 minute and 5 seconds long, a minor water leak can be seen pouring out from the ceiling of what allegedly is said to be Jewel Changi Airport by the netizen who shared the post online. The man who was filming the incident can be heard mocking the incident, with phrases such as “Waterfall…… OOooo dropping!!!! OOooo waterfall!!!!” while laughing away in the video.

Many can be seen taking videos and photos of the incident as well, while others just ignored it. Two workers can be seen rushing to solve the leak, using a broomstick.

Jewel Changi Airport welcomed its first visitors on Thursday, 11 April 2019, as it opened its doors to the public for a preview before the official opening date on 17 April 2019.

It is good to know that although there might have been a minor water leak at Jewel, it happened before the official opening date. This makes it possible for the team behind it to rectify any mistakes that may exist. After all, it is a really big construction project that’s not easy to build.

According to an article by Channel News Asia, Water leaks at Changi Airport’s Jewel and Terminal 1 on Saturday afternoon (Apr 13) were caused by a sprinkler issue, a spokesperson said.

“There was a sprinkler issue in Jewel yesterday afternoon which caused water leakage in the Terminal 1 Arrival Hall. An unoccupied tenant unit in Jewel was also affected,” said the spokesperson in a statement on Sunday.

“The issue was quickly attended to and resolved with minimal impact to operations,” she added.

The video can be seen here: